By CGTN’s Ding Dai
The divisions among Venezuelans and between the government and the opposition are not new. And protests have been going on since the economy went bad.
Prices rose by 800 percent in 2016, with the IMF predicting inflation could hit 2,200 percent by the end of this year. Meanwhile, the economy shrunk by 18.6 percent last year, according to Reuters. 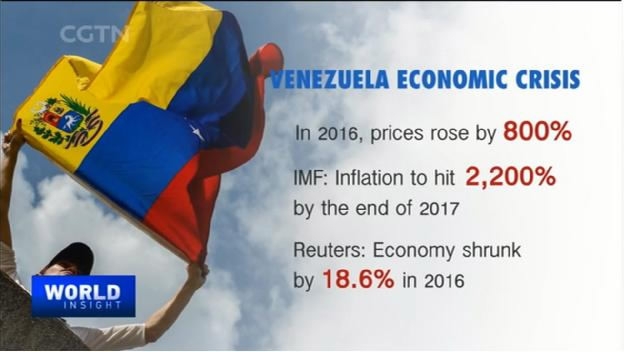 CGTN Photo
“Venezuela has been a very polarized society in the last 20 years,” Daniel Fermin, researcher for the Center of Political Studies at the Andres Bello Catholic University, told CGTN’s World Insight.
Some 86 percent of the population now have different views on the country’s future or the political system, he said. This includes Chavistas – supporters of former president Hugo Chavez – and even current Chavistas that don’t identify with President Nicolas Maduro.
For Maricruz Magowan, vice president of the National Economists Club, simply removing Maduro will not solve the problem inside Venezuela. That might take years.
“We haven’t heard of these kinds of protests for 15-16 years. Why? Because they were receiving things for free. That is not sustainable,” she noted. 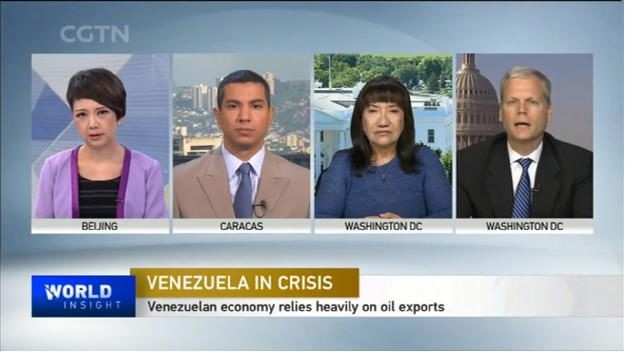 CGTN Photo
Venezuela’s four-year economic recession has caused shortages of food and medicine. Polls suggest Maduro’s party will have difficulty winning another presidential election.
Maduro says opponents are seeking a coup with US support and harbor «terrorists» and «murderers» in their ranks.

The 54-year-old successor to Hugo Chavez is setting up a super body known as a «constituent assembly» with powers to rewrite the constitution, shake up public powers, and potentially replace the legislature. But Maduro insists he’s open for dialogue with his opponents and is willing to end the violence.